Beads, they’re sewn so tight features the work of four contemporary artists who innovate in the field of beading and quillwork. Over 40 beaded works by Bev Koski, Katie Longboat, Jean Marshall, and Olivia Whetung are included in the this exhibition guest curated by Lisa Myers and organized by the Textile Museum of Canada in Toronto.

In beadwork, threads create structure and hold beads together, creating a seemingly invisible scaffold. Beads offer a metaphor to consider the social and political relations and patterns that shape traditions both in the family and the community. From weaving to loom-work and embroidery, the artwork gathered for this exhibition threads together formal aspects of art making such as colour and composition with critical issues such as language retention, stereotypes, and social and environmental injustices for Indigenous people.

Bev Koski’s new beaded series consists of swatches of modernist abstract patterns found in day-to-day life, from product packaging to family photographs. Pattern is also a focus of Katie Longboat’s study of her Cree grandmother’s bead designs, which inform her experimentation with Cree floral design and Haudenosaunee raised beadwork. Jean Marshall’s floral beaded mittens and quill-adorned moccasins which are arranged in a circle, suggesting the gathering of Treaty #9 leaders to contend with economic development and environmental degradation. Olivia Whetung’s loom works highlight both the presence and absence of beads, asserting a visual vocabulary of place.

Bev Koski is an Anishnabekwe artist who lives in Vancouver. She is a graduate of the Ontario College of Art and has a BFA from York University. Koski was involved for many years with 7th Generation Image Makers, an art and mural program for Indigenous youth, run by Native Child and Family Services of Toronto. She has shown her work at the Harbourfront Centre in Toronto, Kamloops Art Gallery, Carleton Art Gallery, Thunder Bay Art Gallery, Gallery 44, and Oakville Galleries. She is a constant beader. 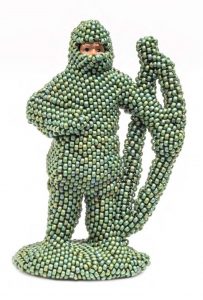 Katie Longboat is both Mohawk and Cree from Six Nations of the Grand River and is currently living and working in Toronto. She began her beading journey at the age of 14, inspired by the beautiful beadwork worn by traditional and contemporary dancers at local powwows. Katie took an interest in other beading styles and began to merge traditional First Nations beadwork with contemporary practices. She enjoys creating intricate pieces that pull together traditional Cree florals, Iroquois raised beading and contemporary jewellery making techniques. Katie works full time as a Child and Youth Counsellor and teaches beading classes at the Native Canadian Centre of Toronto and other community organizations. 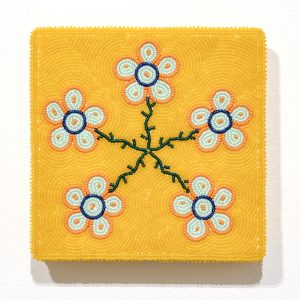 Jean Marshall is of Anishinaabe/English descent, born and raised in Thunder Bay. She comes from Kitchenuhmaykoosib, also known as Big Trout Lake. She currently lives along the shore of Lake Superior, on the lands of Animikii-Wajiw/Thunder Mountain also known as Fort William First Nation, ON. Marshall loves working with beads, fabric and porcupine quills and has learned her practice through observation, mentorship, and by participating in residencies. She admires the creative thinkers Patricia Ningewance, Rebecca Belmore, Christian Chapman and the late Ahmoo Angeconeb. Her work focuses on land, identity, community, and language. She was the recipient of the K.M Hunter Award in 2012 and the REVEAL, Indigenous Art Award in 2017. 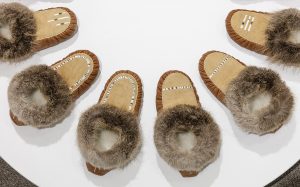 Olivia Whetung is Anishinaabekwe and a member of Curve Lake First Nation. She completed her BFA with a minor in anishinaabemowin at Algoma University in 2013, and her MFA at the University of British Columbia in 2016. Whetung works in various media including beadwork, printmaking, and digital media. Her work explores acts of/active native presence, as well as the challenges of working with/in/through Indigenous languages in an art world dominated by the English language. Her work is informed in part by her experiences as an anishinaabemowin learner. Whetung is from the area now called the Kawarthas, and presently resides on Chemong Lake, ON. 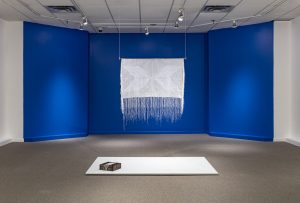 organized and circulated by 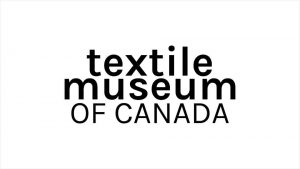