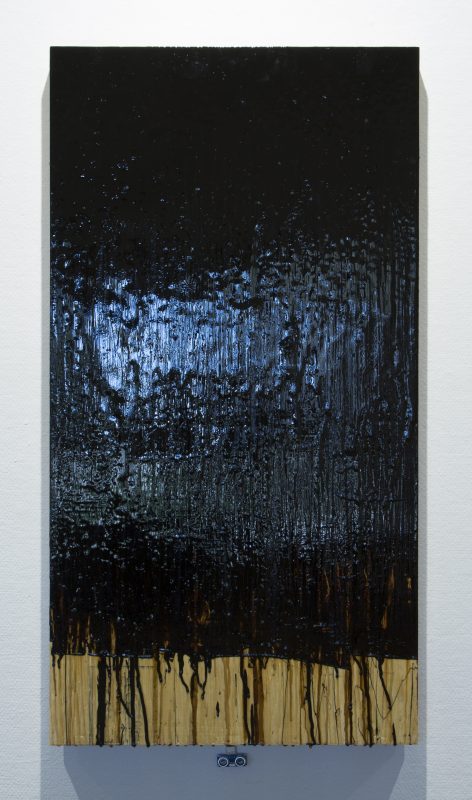 “Tarlacan is a series of paintings created using roofing tar and floor varnish on a plywood base. The semi-reflective surface acts as a mirror offering the viewer an alternative view of themselves. The title of this work is a portmanteau of Tar and Lacan as in Jacques Lacan who famously wrote about the mirror stag e, the point in a child’s development where they recognize themselves in a mirror. The intention with these works is that when the viewer engages with the work they are confronted with an oily vision of themselves and as a result recognize their implication in oil culture. This idea is reinforced through the use of LED lights that run around the edge of the work and that brighten as the viewer approaches the work”.

Aaron Veldstra is a multi-disciplinary artist and educator living in Thunder Bay. He holds a Masters of Fine Art in intermedia from the University of Alberta. Drawing on his dual lives as both an artist/academic and as a labourer in resource based industry, his work raises questions of climate change, and industrial transformations of the landscape. For example, his MFA thesis show titled: Our Anaerobic Future threaded together his experience of “bush life” in silviculture and mining with a visualization of the impact of mining on northern land. He draws inspiration from land artists from the 1960s to the present and sees his work as a continuing investigation of the ephemeral as well as the corporeal. Simply put, his work is a blending of temporary sculpture, painting, and performance.