The painting is filled with the markers of Formline Design; the shapes the figures in the foreground respectively lift and sit upon, the foliage of the tree, the rolling hills in the background, and so on, all echo one clear message: this is Indigenous land. Yuxweluptun reclaims various culturally-specific design elements and inserts them into a surrealist landscape that simultaneously reflects European landscape painting traditions. In doing so, the artist asks us to reconsider how we understand Indigenous art from the Northwest Coast, as well as the important socio-political issues that arise from its interpretation.

Central to the painting are two figures in business suits. These ‘authorities in suits’ are Indian-Agents or non-Indigenous bureaucrats and in the foreground, two Indigenous figures are engaged in a shielded conversation. There is an overall undercurrent of tension: deals are being negotiated and decisions made without input from, and perhaps not in the best interest of, the people they represent.

Painted during a time of negotiations between the BC, Federal Governments, and Nisga’a Nation, which culminated in the Nisga’a Treaty in 2000, Yuxweluptun was highly critical of the actions of Indigenous leaders and felt that they were short changing their people’s interests. The scene painted by the artist reflects his skepticism and challenges the decisions of political leaders, an authority he feels have devalued the interests of Indigenous peoples in Canada.

This work was purchased by the Gallery in 1997 with the support of the Canada Council for the Arts Acquisition Assistance Program.

Originally published in The Walleye – DEC 2017 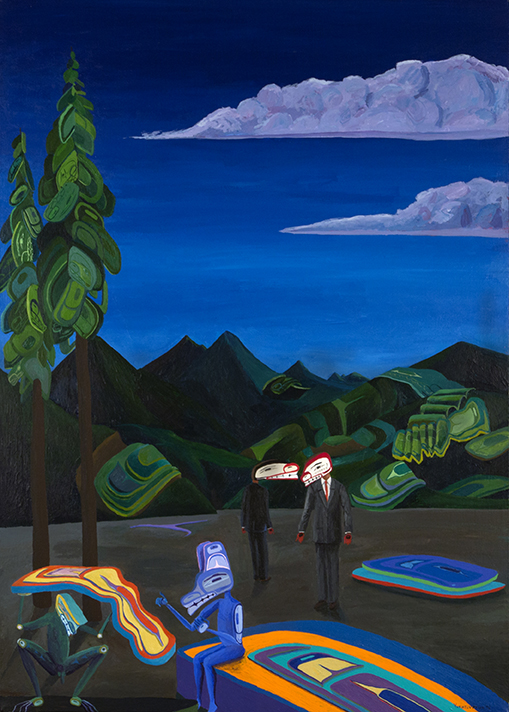