Lac Seul (Obishikokkang) First Nation artist Ahmoo Angeconeb (1955-2017) has had a career spanning over thirty years. With multiple exhibitions across Canada and abroad, his work examines and draws from the rich visual heritage of the Anishnawbae. In the block print Thunderbirds doing T’ai Chi, Angeconeb illustrates two mirror-imaged Thunderbird figures going through the mind-body motions of T’ai Chi. The low-impact martial art form is known for its holistic health approach and in this work Angeconeb humorously imagines the possible ways in which Thunderbirds may meditate and find peace of mind. These sacred and powerful Manitous (spirits) play a key protective role in Anishnawbeg cosmology and their images are not only depicted in contemporary art, but can also be found on the ancient stony cliffs of Northwestern Ontario.

With 43 works in the Thunder Bay Art Gallery’s permanent collection, Angeconeb’s work represents a significant contribution to the collection and includes the two commissioned metal sculptures titled Man from the Caribou Totem and Man from the Caribou Totem Box which greet gallery visitors year round. In recognition of his artistic contributions, Angeconeb was awarded the Alumni Honours Award by Lakehead University in 2014.

Originally published in The Walleye – JUN 2017 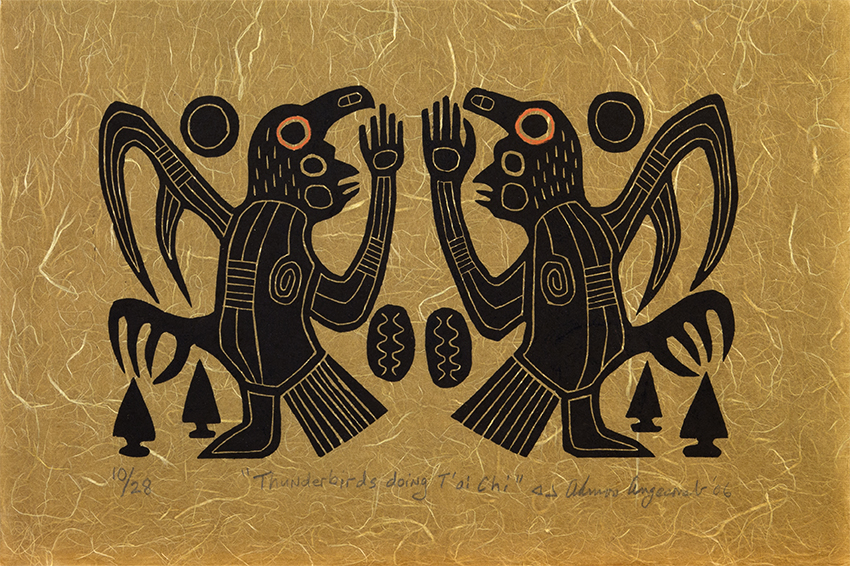