Waabanda-Iwewin (a show, an exhibition) was a juried exhibition of work by Indigenous artists from Northwestern Ontario organized by the Thunder Bay Art Gallery in 1984. It was the culmination of a year’s work by Mary Zoccole, Arts Development Officer. Zoccole’s role included coordinating the exhibition, contacting communities, assembling information on arts resources in Ontario, promoting sources of financial assistance for artists, and creating an inventory of the number of artists working in the region. To provide a sense of the scope of the project, Zoccole “contacted 25 Northern radio stations, 23 Northern schools, 50 Métis locals, 23 Anishnabequek locals, 58 reserves, 23 Indigenous organizations in Thunder Bay, 19 Friendship Centres, 58 churches on reserves, 64 various resource people.” In addition, she “wrote to or spoke with 127 artists.”

From that enormous amount of work, the exhibition received 130 submissions from 51 artists. The jury of three, which consisted of Gerald McMaster (then Curator of Contemporary Indian Art at the National Museum of Man in Ottawa), Norm Opperman (owner/manager of Nishnawbe Arts in Toronto), and artist Leo Yerxa, selected 31 paintings, drawings, prints and photographs created by 21 artists. Among those selected were two paintings by Barry Peters, including Signs of Fall.

Born in Pikangikum in 1958, Peters had already been painting and exhibiting for many years by the time he submitted his work to the jury for Waabanda-Iwewin. Peters was also a member of the Triple K Cooperative, the first Indigenous owned silk-screen company, founded by Joshim, Henry, and Goyce Kakegamic. One of his prints, Fisher and Rabbit, was on display at the Gallery in the exhibition Waabooz/Rabbit, on until November 28, 2020. The style of that print and the painting seen here are very different. Indeed, it was noted in the Waabanda-Iwewin catalogue that his “style had changed dramatically in the 1980s to more figurative and landscape work, influenced by the painting of Don Ningewance.”

Waabanda-Iwewin was exhibited in Thunder Bay over the summer of 1984 and then toured to several locations in Ontario, including Toronto, Fort Frances, Atikokan, Gormley, Leamington, and Timmins. After the tour, with the financial support of a Bicentennial Grant from the Province of Ontario, most of the works were returned to the Gallery to become part of the Permanent Collection.

Originally published in The Walleye – OCT 2020 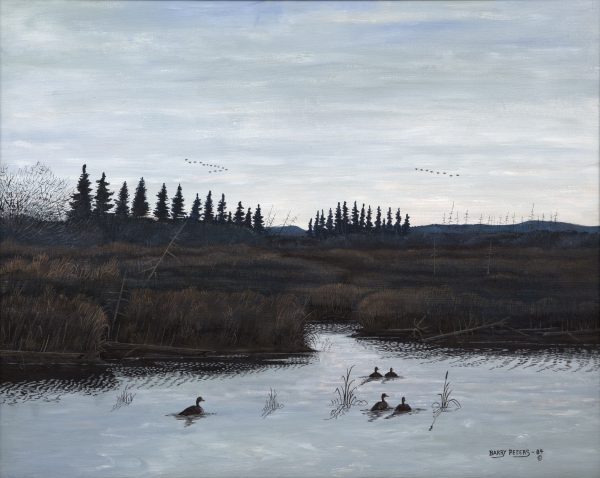