Born in Alert Bay, BC, Neel studied wood carving practices under her grandfather Kwakwaka’wakw carver Yakuglas, Charles James (c. 1870-1938). In 1943, she moved with her husband to Vancouver, and, when he became ill, she made art to support her family, which grew to include eight children. She developed an incredibly prolific art practice, producing small, mid-sized, and monumental sized totem poles. She went on to open her studio shop, Totem Art Studio, as well as a workshop at Ferguson Point in Stanley Park. Out of these places Neel sold miniature totem poles, masks, and items that she designed and decorated, such as coasters, placemats, and ashtrays.

Of works, such as the one in the Gallery’s collection, Neel herself said in 1948, “Were it not for the interest created by the tourist trade, the universities and the museums, we would no longer have any of our people capable of producing this art…. I have strived, in all my work, to remain authentic, but I find it difficult to obtain a portion of the price necessary to do a really fine piece of work.”

In 2017, the exhibition Ellen Neel: The First Woman Totem Pole Carver, opened at University of Victoria’s Legacy Gallery Downtown, showcasing work by not only Neel but also that of her children, grandchildren and great-grandchildren. The show’s intentionally provocative title aimed to draw out more stories of Indigenous carvers who were also women. Speaking about the exhibition, Lou-ann Neel, granddaughter of Ellen and the exhibition’s advising curator, explained in an interview with the Globe & Mail, “It’s a really colonial idea that our women didn’t carve. Our women have always carved…I’ve already heard a few people say, ‘Well, you know, our grandmother was also a carver.’ Good, I want to hear about her. Let’s talk about her too. Because all of our communities need these role models to come from the last couple of generations and encourage our young girls and women to pursue the arts, too.” Ellen Neel’s artistic legacy continues for generations of artists, including her grandson David A. Neel.

Originally published in The Walleye – NOV 2018 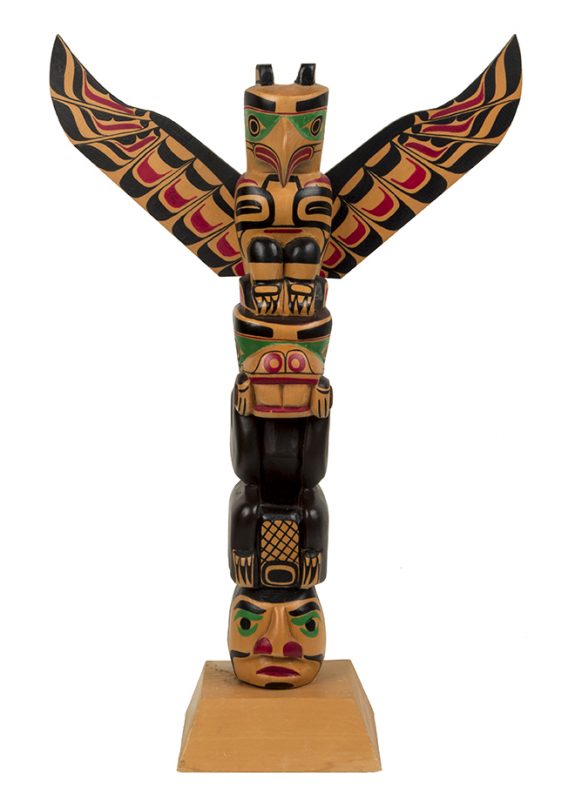