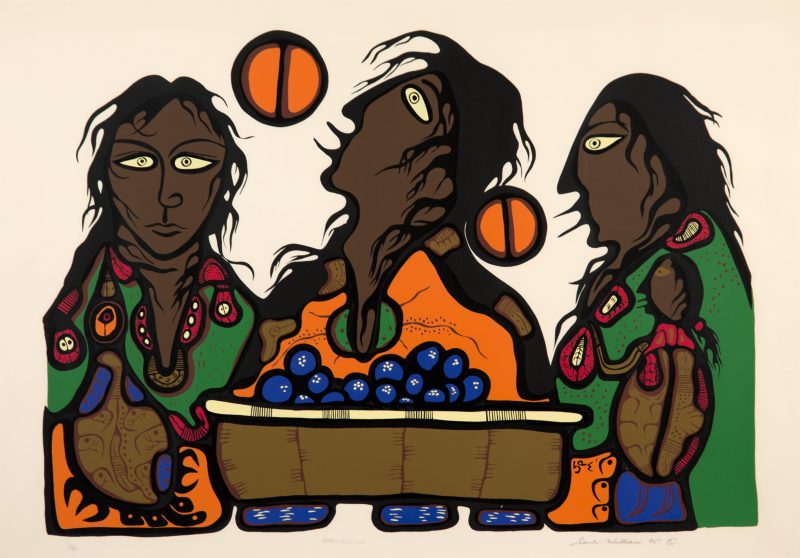 Blueberry season is here. An ice cream pail full of wild blueberries is something many of us wait for all summer (and dream about all winter). Picking those first ripe berries in a favourite (secret) spot is a moment of delight, joy, and even more than that, a feeling of home. Berry picking connects us to the rocks, water and boreal forest and the place we live.

Berry Picking by Anishinaabe artist Saul Williams (b. 1954) presents berry picking as an entry point into themes of memory, relations and Anishinaabe myth in Northern Ontario. The artist depicts three human figures near a birch bark basket full of ripe blue berries. Common to Woodland style, a fourth human figure and a loon appears ‘inside’ two of the figures. Two larger orange circles float diagonally near the head of the central figure as celestial orbs, or life circles. Interestingly, this figure has their mouth open to the highest orange orb, perhaps in song. Williams’s berry pickers evoke feelings for the blueberries that are deeper than joy.

Williams is considered a Woodland School master painter. In this serigraph, his contrasting colours of red and green and blue and orange make his dark, bright, moody, palette sing. Many of his works feature earthy shades of brown, tawney, and ochre. An Anishnabek News article by Barb Nahwegahbow in 2017, Williams said that his works are inspired by stories and legends he heard from his grandparents and other elders, growing up in his North Caribou Lake, ON community, “That’s how people taught their kids,” he said. What teachings or stories about berry picking do you think are present in this work?

Did you know the Ojibwe word for “blueberry pie” is one of the longest in the language? Here’s a new word to practice or hum while out picking berries: miini-baashkiminasigani-biitoosijigani-bakwezhigan.

Originally published in The Walleye – AUG 2021